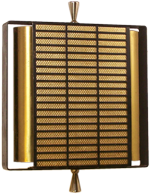 Described in the 1960 Rittenhouse Catalog:

Even in 1960, the Gem, with iron and aluminum construction, was bucking the trend as manufacturers, including Rittenhouse, increasingly turned to plastic covers. The 330 Gem series chimes were available from approximately 1960 until perhaps 1970. The Gem was likely a victim of cost pressure due to manufacturing costs.