The depression era market for doorbells fell precipitously along with the steep drop in construction. U.S. housing starts frell from 500,000 per year in 1929 to fewer than 100,000 in 1933. Economic necessity is often the mother of invention and thus the financial conditions of the 1930‘s fostered an explosion of doorbell innovations.

Fortunately for the doorbell industry, a breakthrough product created a retro-fit market. These new “door chimes” or “musical door chimes” produced a sound by striking one or more metal tone bars. 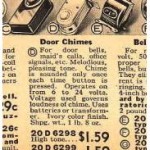 Door Chimes made their first appearance in the Sears 1936 Fall Catalog and were described as follows:

“For door bells, maid’s calls, office signals, etc. Melodious, pleasing tone” that is “sounded only once each time (the) button is pushed.”

Both these claims are clear references to the alarming noise sounded by a doorbell or buzzer, and the annoyance brought when an insistent caller “leans” on the doorbell.

The superiority of a Door Chime over bells and buzzers enabled the industry to re-market door chimes to owners of existing doorbells in much the same way that consumers were later enticed to replace their black and white televisions with color sets. This was important during the depression since the only people with disposable income were those with finer homes, who were also the most likely to have installed an old style doorbell and electricity during the previous forty years.

Although 1936 was the earliest mention of “Door Chimes” in a Sears catalogs, similar door chimes had been available since as early as 1930. 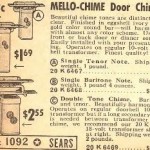 By 1938, Sears offered three musical door chimes. One was a “Single Tenor” high note, another was a “Single Baritone” and the top of the line “Double Tone Chime, Baritone and Tenor” which was described as “Beautifully Harmonized” and struck both tone bars simultaneously.

All three of these door chimes were manufactured by Mello-Chime, An early leader in door chimes.

In the coming years, Sears would market door chimes under their own brands along side Nutone, Mello-Tone and Rittenhouse products.