The premise that a doorbell made noise and a door chime was pleasant to the ears was quite the hot topic in the 1930s.  Although electric doorbells had only been common for about 25 years in American Cities and less than 5% of farms even had electricity as late as 1936, marketers were busy convincing consumers they needed a door chime to live in peace. 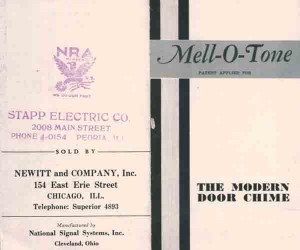 Mell-O-Tone was an early proponent of door chimes. This brochure can be dated to between 1933-1935 from it’s National Recovery Act Eagle stamped on the back summarized the “door bell problem” eloquently:

“How often has the peace and quiet of your home been disturbed by shrill, nerve-racking ringing of a door bell? Has your door bell ever gone out of order at just the wrong time, causing confusion and embarassment?

Frankly, there’s no place in life for such trivial things as “door bell problems.” That is why modern households rely on the soft, melodious call of Mell-O-Tone door chimes to announce visitors.

This new and practical door chime replaces the harsh door bell ring with a pleasant musical chime… a sound that will not annoy or startle, yet loud and persistent enough to attract attention. It is installed by simply attaching to the present door bell wires.”

The A.E. Rittenhouse Company, like many other manufacturers, soon joined the door chime chorus.

The 1937 Rittenhouse  brochure printed several glowing testimonials touting door chimes including this one:

I feel that I must tell you how much we appreciate the Rittenhouse Electric Door Chime which has been the center of attention in our home ever since its installation.The attractive design adds a beautiful decorative effect to our hallway.

And the soft-tone of the chime is so soothing to the nerves—such a relief from our noisy buzzer. Truly, I often wonder how we ever put up with such an old-fashioned, nerve-wracking noise for so many years. 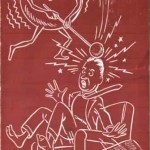 Nutone’s 1938 brochure really denegrated doorbells going  so far as to declare: “The Door Bell is Noise Enemy No. 1.”

Apart from the vivid line drawing on the cover of the brochure, there is no copy inside the brochure to fully detail the charges Nutone levied against doorbells.  The tagline was most likely inspired by the popular James Cagney film Public Enemy andthe  FBI’s “most-wanted” posters that dominated the public consciousness about crime in the 1930s

By the 1950’s Nutone’s marketing had become a good deal more civil, perhaps reflecting the war with doorbells had been won. In store displays and print ads, Nutone marketed their products as a “Cheerful Earful.”

A True Miniature Door Chime to Replace a Doorbell 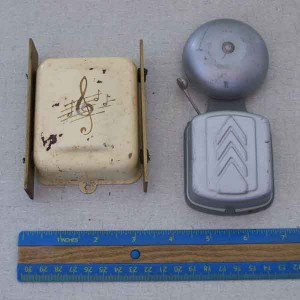 At least one manufacturer built a true ding-dong chime that was no larger than a standard doorbell and was meant to occupy the same space as a doorbell or buzzer. This is the smallest true door chime in the Doorbell Museum.