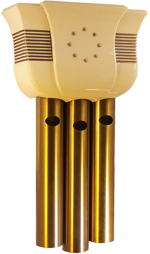 Beverly Model – The highly popular model is ideally suited for those people who prefer a chime which takes up less space than the long-tube model. It has a beautifully rich resonant tone, a melody of either 3 or 4 notes. A simple link attachment makes it possible to install the chime to play either a 4-note melody or a shorter 3-note sequence if the owner prefers. The Rittenhouse volume control permits adjusting the tone to any desired level. A shut-off switch also makes it possible to completely turn off the unit if for any reason you do not wish to be disturbed. The rich, ivory plastic housing and the graceful brushed brass tubes combine to provide a beautiful design that is in good taste in any home.

As envisioned by Norman Bel Geddes, the Beverly would have had some space between the resonator chambers however production models had the chambers all but touching each other.