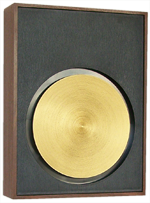 The Friedland-General Electric Maestro door chime plays an eight-note Westminster sequence with a “Vibrato Resonance” feature unique to this chime.

The styling is a tasteful later mid-century treatment. The walnut finished case frames a matte black field with a gold disk. The overall effect is a higher end execution of the similarly styled Friedland Warbler (1969). The Maestro case is reminiscent of Gold Record Awards that decorate the walls of successful recording artists.

The mechanism is a typical motor-driven chime with contacts arranged radially on a circuit board. The contacts are closed in turn by a rotating commutator to energize various solenoids to play the eight note melody. The vibrato feature is achieved by means of an ingenious belt driven system that rotates butterfly valves in front of the resonator chambers thus altering the sound waves.

This example was branded in the United States by the General Electric Company. The box is dated 1985, although the Maestro was marketed under the Friedland name in the U.S. at least a decade earlier. Friedland most likely partnered with General Electric for access to GE’s U.S. distribution system. In Great Britain, this chime was marketed as the “Friedland 603 Westminster.”

Friedland was a skilled and successful exporter with chimes from their Stockport factory sold all over the world as evidenced by the wordless schematic wiring diagram with musical notations molded into the motor dust cover.

General Electric might have done a better job marketing the Maestro if it had played up the “Vibrato Resonance” as the earlier Friedland advertsing had. General Electric didn’t even bother to highlight the feature on the box which describes the calls as “Grand 8-note ‘overture’ signal plus two separate 1-note signals.” The British packaging similarly neglected the vibrato feature.