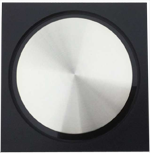 As with typical “ding-dong” doorbells, when the pushbutton is depressed,  the solenoid is energized so the plunger strikes shorter tone-bar for the first note and then recoils by spring action to hit the longer tone bar for a the second note.

In the case of repeating chimes, the chime continues to strike both tone bars in rapid succession so long as the pushbutton is held. This is accomplished by means of a mercury switch which enables gravity to momentarily interrupt the current allowing the plunger to recoil before repeating until the pushbutton is released.

The cover of this chime is similar to another designed by John Doggart of Middlefield England in 1968 although the disk on this chime is recessed instead of floating above the case. A similar design was used for the Friedland Maestro. Marketed by Thomas Industries in the United States and manufactured by Friedland in England. This chime was available with a circular brass colored insert in addition to the stainless version shown here.

This door chime is a successor model to earlier “Warbler” models. Typical of many British door chimes, the Warbler may be operated with onboard batteries or connected to a transformer. The Warbler was model number 454 in the Friedland line and described in the 1977 Catalog:

454 Warbler Diamond polished disc, finished as Danish silver, on a black housing with finely textured surface. Has large built-in resonating chambers to give full tone. Repeating two-note signal for the front door and double note for a second signal. Repeating mechanism operated by life-time mercury switch to give a balanced signal. Four 1 1/2 volt “Mono’ Batteries can be fitted inside the chime… Easy to fit, simple to wire can be used with Friedland 752 transformer if mains operation is desired.

See the Edwards Sylvan for a video of a repeating chime in action.