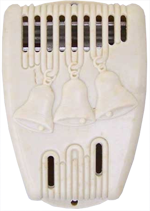 This modest, yet popular, door chime was marketed under various brand names from 1940 through the 1960s. Early examples were marketed by the Marks Products Company and later by Snapit and Leviton.

As it’s name would imply, this doorbell plays a single note on a tone bar. The 1940 tear drop style shares some similarity with the 1938 Rittenhouse 101 although the tone-bar is concealed. This chime, along with the equally popular Snapit Golden Tone two tone chime, made use of innovative U-shaped tone-bars. The curved tone bars allowed For a more compact door chime with the same acoustic qualities of a flat tone bar that would require greater space. As important to this design is the elimination of the need for rubber grommets to mount the tone bars.

Alexis C. Grohsgal filed a patent application for this chime in April of 1940 and US patent 2,391,698 issued in December of 1945. The claims for the patent explain the advantages of the tone-bar as follows:

(U)se is made in all forms thereof of a vibrating element or elements which are substantially U-shape in cross section whereby such element acquires to some degree the characteristics of a tuning fork. Due to this shape of the element, it is possible to attach the same to a supporting casing or mount by means of a plate member which can be secured to the vibrating element at any of a number of points within a very wide range, which range is present along the loop portion of the element. 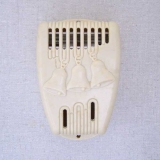 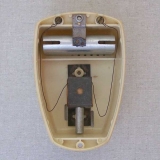 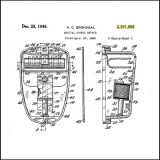