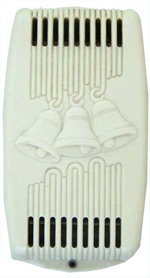 This popular door chime was marketed under various brand names from 1940 through the 1960s. This chime was available with an ivory or walnut colored Bakelite case.Early examples were marketed from by the Marks Products Company and later by Snapit and Leviton.  The copy on the earlier box from Marks Products sells against the common doorbells in that it “Replaces Old Fashioned Door Bells and Buzzers.”

This chime shares the innovative use of U-shaped tone-bars with the Snapit Single Tone doorbell.  A curious feature of this chime is that the two tone bars are copper and brass in color. The assumption would be that the two different metals were used to achieve a particular acoustic quality. However, both are merely electroplated with brass and copper and a thin electroplated coating of either metal would have no discernible impact on the sound.

Another explanation might be that various parts were plated with different metals at different times and since the tone-bars were concealed, it wouldn’t make any difference to appearance or operation if the parts were mixed and matched. Observation of several chimes made over a period of many years reveal that in all examples, the top bar is copper plated, and the bottom tone-bar is brass plated which tends to discount the mix and match theory.

Perhaps the use of two different plating materials simplified assembly since both the high-note and low-note tone-bars appear to be identical in size and shape.  The difference in note is achieved by a small difference in the thickness of the bent steel.  The different colors would have provided a simple visual prompt during assembly. 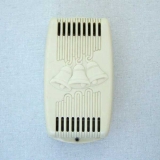 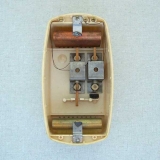 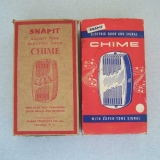 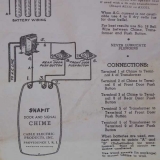