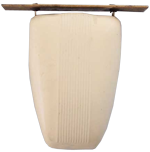 The Rittenhouse Model 101 was one of two “Bar Chimes” in the Rittenhouse line in the late 1930s. This early example probably dates to 1938 or early 1939 as it is marked Patent Pending and the design was indeed issued a patent in May of 1940.  The 1939 Rittenhouse brochure describes the Model 101:

In some advertising and catalog copy, this doorbell was called the “Pilgrim.”

Like many of the earliest door chimes, the Rittenhouse 101 struck only a single note for the front door. As seen in the patent drawing figure 3, the entire body of the chime serves as an integrated resonator chamber.