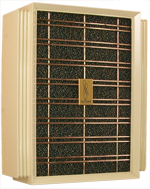 NuTone’s home town paper, the Cincinnati Enquirer, spoke in superlatives upon the introduction of the Chord Tone describing it as: “the world’s first chime with vibrant chord tones.” Technically, this is true as it was the first chime that played two chords for the front door, although earlier chimes are known to have played a single chord by striking both tone bars or tubular bells simultaneously.

As early as 1939, the Mello Chime Harmony played a single chord on two tone bars. Indeed, the 1940 NuTone Model C was available as either a two note or single chord chime. And the NuTone Elite employed two stacked solenoid units and four tone bars to produce two chords for the front door.

At the introduction, the Chord Tone was available in lime oak or walnut however these choices were apparently discontinued by 1958 with only Desert Sand available for the cover. The Chord-Tone was relatively short lived having disappeared from the NuTone Catalog by 1960.