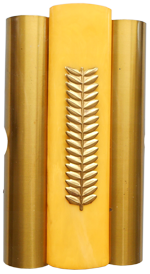 The Rittenhouse Windsor dates to the early 1940s and features a vertical brass wheat-shaped medallion common to other Rittenhouse chimes of the period. The design is attributed to Norman Bel Geddes.

Unique to this chime is a relatively narrow footprint accomplished by tightly enclosing the tone bars within the cylandrical brass chambers instead of externally as with typical resonator chimes.

Rittenhouse products, along with many other consumer products, were distributed to retailers via wholesalers who published large catalogs. The Windsor was described in the 1940 N. Shure Catalog:

Windsor Model. This new enclosed bar chime seta a new high in attractive styling. The two brass resonator tubes combined with a plastic housing produce a rich effect. The tone bars are totally enclosed with the resonance tubes which is an exclusive, patented, Rittenhouse feature. This produces a very pleasing tone quality and at the same time permits a more attractive design. It is furnished in the two-door type only within sounds two notes for the front entrance and a single note for the rear or side entrance. Operates on any goods bell transformer or on batteries. Ivory and Brass finish. Size 8 inches high by 4 1/2 inches wide. Suitable for apartments.