This Mell-o-Chime doorbell is a an Art Deco sister chime to the Mell-o-Chime Stylist and Longfellow Apollo.  These chimes share a large number of internal and external components and materials, including bakelite covers and identical mechanism. 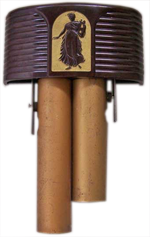 A contemporary Mell-o-Chime brochure issued for the trade described the Aristocrat as follows:

This is believed to be a later model of the Aristocrat 311, as it has painted resonator tubes instead of the brush brass tubes described in the brochure and used in the first generation Aristocrat. The tone-bars in this exampe are painted black instead of Gold, and the ends are square, as opposed to rounded.