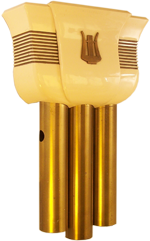 Described in a 1950s Rittenhouse Catalog:

The Sentinel  – High style and performance at a moderate price. This model is available either with 3 tubes or with 2 tubes. Both models sound two rich, resonant tones fro the front door and a single-note for the rear door. Ivory plastic housing with gold finished decorative motif. Tube finish, brushed brass. Has Rittenhouse “Floating Percussion” mechanism which insures quiet, long-life operation.

A later iteration of this chime with two resonators features a stylized eagle in place of the lyre and are known as the Rittenhouse Newport model 314.