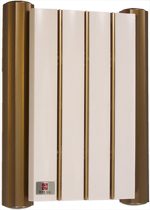 The Matsushita Electric Company Pipe Six Door Chime is one of the few examples of Japanese made electo-mechanical door chimes in the museum. This example was apparently made for the Japanese market and marketed under the National name. Matushita Electric Company successfully marketed a wide variety of household appliances in the United States beginning in the early 1960s under the Panasonic Brand. In other markets, Matsushita was marketed under the National Brand.

The Pipe Six name describes both the resonators and the number of notes played. A similar descriptive naming convention is also seen on the Sanyo Fan 8 door chime.

Clearly, a great deal of careful engineering is incorporated in this door chime. And although Matsushita and Panasonic were hugely successful in the North American market, that success apparently did not include door chimes as surviving examples are scarce.