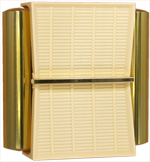 Upon introduction in 1958, this iteration of the NuTone L16 was known as the Harmony. but by 1961 the name was changed to Futura. The Futura would remain in the NuTone catalog until at least 1970. In 1958, the chime was described as follows:

Harmony was used by several other manufacturers including previous models from NuTone. NuTone probably changed the name to avoid confusion in the marketplace. Or, perhaps the name was changed to Futura because it better reflected the mid-century aesthetic.