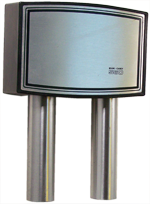 This Miami-Carey Resonator has styling reminiscent of the “Outer Space” aesthetic popularized by the George Lucas Star Wars film (1977) and the ABC Television Battlestar Gallactaca series (1978). Responding to fashion, manufacturers rushed products featuring brushed aluminum and stainless steel to market. Commonly, a stylized computer-like font was used for branding. Just as often, numbers replaced names to lend a further “tech” feel to goods. This chime followed the space trend much as earlier chimes evoked the then new stereo technologies.

While fairly typical in form, the Miami Carey 560 is one of the few chimes to have stainless steel resonator chambers. At the time of manufacture, Miami-Carey was a division of the Jim Walter Company.