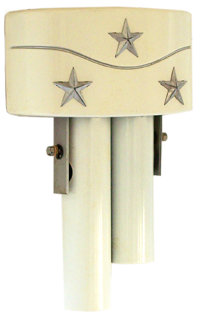 The Betsy Ross resonator from Rittenhouse has a patriotic theme common to American door chimes in the late inter-war period. Rittenhouse’s pre-World War Two line of chimes featured two “Big-Value Groups”, the Autograph and Amerciana Series. The Americana series was described in a pre-war catalog as to have: “[I]nterpreted the gracious character and pleasing simplicity so typical of American tradition.” The description goes on in superlatives: “These new models literally glisten with smartness.”

The catalog description for the Betsy Ross reads:

A 2-note model especially designed for kitchens. The white, enameled finish contributes a striking background for the three contrasting metallic stars, individually applied. Tones are rich and pleasing. For the front entrance, a two-note signal, for rear or side doors, one note.