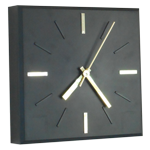 Among the last of the TeleChron motor driven Chime Clocks is the Rittenhouse Onyx. This mid, 1970s door chime has minimal lines. The chime mechanism has onboard resonators and a chassis common to many later commodity door chimes. The solenoid unit does have a provision for a transformer wire to provide continuous power for the 16 volt Telechron Clock mechanism. Later clock-chimes employed a battery driven clock mechanism.

As described in the catalog: