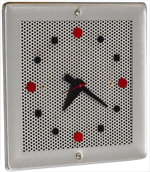 The Progress E-14 recessed clock-chime represents a transitional period in door chimes. The mid-century-modern aesthetic relied heavily on built-in appliances and the more mundane home necessities were often hidden. In this example, an atomic style clock hides the chime mechanism with two tin-can resonators behind an acoustically transparent grill. The entire unit is recessed between the studs of a wall.

The clock movement is a Lanshire electric unit adapted for 16 volts and protected by a circular dust cover. The solenoid unit includes a fourth terminal to connect both leads directly from the transformer to supply constant power to the clock. The solenoid unit design is similar to the Thermotone suggesting a common manufacture.

In the 1950s, the Progress Manufacturing Company of Philadelphia offered a wide range of contemporary lighting fixtures so it is no surprise they extended their line to include this door chime, and possibly others.