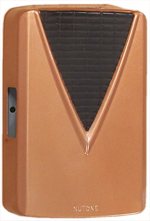 The NuTone V-17 door chime mimics automotive styling that accompanied the widespread adoption of V-8 engines by automobile manufacturers in the 1950s. Other consumer goods adopted similar styling and the V-Tones resemblance to a radio is either highly coincidental or purposeful.

The V-Tone was described in a 1955 NuTone brochure:

A resonator door chime with the same covers was available as the K-19 “Premier”.

The V-Tone and Premier were short-lived having been discontinued by 1959.