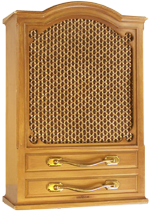 The NuTone L39 Madison is a four or eight note musical chime that plays the Westminster sequence on three tone bars. This Madison is styled like a fanciful traditional wardrobe with ornamental bails on decorative drawers beneath a grille cloth panel topped by a segmented arch.

A common practice among manufacturers is to preserve the equity established with particular model names while updating the product to meet market conditions. The Madison name had previously been been assigned to a striking clock derived from the successful NuTone Jefferson Chime-Clock.

Two years after the introduction of this iteration of the L39, an updated solid state sequencer replaced the Telechron Motored sequencer seen here. I believe this was NuTone’s first solid state sequencer. Solid State should not be confused with electronic chimes which synthesize audio signals or relay the percussive sound of tone bars or long bells. Electronic Chimes were available from NuTone as early as the late 1950s. The Madison example exhibited here plays on tone bars:

The then new, L39 Madison was featured on the cover of the 1965 NuTone Catalog. Within it was described: