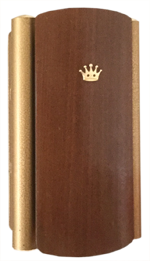 The Westminster Mark II chime was the top of the line offering from VE Friedland in the 1950s and early 1960s. A motored sequencer provides a musical sequence of eight notes played on four tone bars. This chime has a number of remarkable attributes including:

The most striking feature is the facility to play two different eight-note permutations of the Westminster Quarters. The two sequences are played in rotation, with the first sequence played the first time the doorbell button is pushed and the second after the next push. If the button is pushed only pushed once, the next caller is treated to whichever sequence is next in queue. The Mark II designation is likely derived from these two different calls. I surmise the two calls are designed to provide entertainment for the caller to alleviate impatience should the host be delayed in answering the door. The different melodies would also be somewhat calming for the occupants.

In 1961, Britain and the Soviet Union held reciprocal trade expositions to showcase their wares. Friedland was one of 677 British Exporters at the Moscow Exposition, famously visited by Nikita and Nina Khrushchev. The entire Friedland Catalog was translated for the Moscow show. It is unknown whether any Soviet Door Chimes were exhibited at the London show.