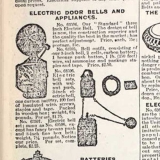 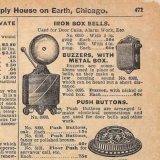 On these pages you will find interesting information about doorbells and door chimes. Check back as I put up new exhibits and content.

A doorbell for your dog? Or a buzzer that thinks it’s a chime?

How about a pneumatic door chime? Check out the doorbell curiosities.

Do you have a doorbell, a door bell or a door chime? Learn about the terminology used to describe signaling devices to let you know somebody is calling.

The pages of the Sears Roebuck catalogs of the late 19th and 20th Century provide a vertical history of doorbells and door chimes.  Learn the fascinating history of America’s largest 20th century purveyor of doorbells.

Door Bell Noise is Public Enemy No. 1? Learn about door bell nerves and other peculiar maladies that helped to popularize door chimes in the 1930s.