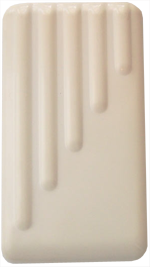 The Faraday Dixie Door Chime was part of a full line of doorbells and door chimes and was likely one of their less expensive models and almost certainly meant to be hung in a kitchen. The catalog entry for the Dixie boasted:

“This pure white chime will rival your gleaming appliances in streamlined, modern beauty.”

Faraday was one of the most appropriately named manufacturers of electric door chimes. The company is named for William Farady, a 19th century English pioneer in electricity who first discovered electomagnetic induction, the principal on which solenoids and electric motors work. The work of William Faraday is in almost all electric doorbells in the Museum.